Fill in the form below for general inquiries 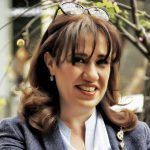 Zara joined CELA as the Fundraising & Communication Manager in June 2011, taking a role of a Finance and Fundraising Manager in 2015. Since 1997, she has been working at the Jinishian Memorial Foundation as a Health Program Coordinator. In 2000, Zara founded the Open Medical Club (OMC), which aimed at promoting healthy communities and high-quality health care services in Armenia. One of the main projects, implemented in 2007-2010 was the “Breast Cancer prevention and Early Detection in Armenia”.

She holds BA from the State Medical University in Yerevan and MA in Public Health from the American University of Armenia. She furthered her education in Atlanta, Georgia and Baltimore, Maryland in the US, and later at the University of Sussex in the UK. Zara is an alumna of CELA 5.

Zarina joined CELA as a Network Development Manager in 2013. Since 2015, Zarina works as the Executive Director of the American Chamber of Commerce in the Kyrgyz Republic. Prior to joining the Chamber of Commerce, her previous work experience includes international gold venture, the U.S. Embassy, international development organizations both in the Kyrgyz Republic and US. Zarina is a founder of “WomenInTech” NGO and an active Board member of many government and public institutions in Kyrgyzstan.

Zarina holds a BA in Business Administration from American University of Central Asia and a MA in Public Administration from the University of Hawaii at Manoa. She is an alumna of Asia Pacific Leadership Program, the FLEX Program, the Central Asia-Caucasus Young Leaders Fellowship Program and Global Village for Future Leaders of Business and Industry. Zarina is an alumna of CELA 9.